The United Nations Sustainable Development Goals are the blueprint to achieving a better and more sustainable future for all. They address the global challenges we face, including poverty, inequality, climate change, environmental degradation, peace, and justice.  Air transport is an essential enabler of the United Nations (UN) 2030 Agenda and plays an important role in Indonesia.

In addition to providing skilled and often high-value employment opportunities, aviation supports some key areas of economic development through the connectivity it provides. This includes transporting around a third of world trade by value and 54% of global tourists. 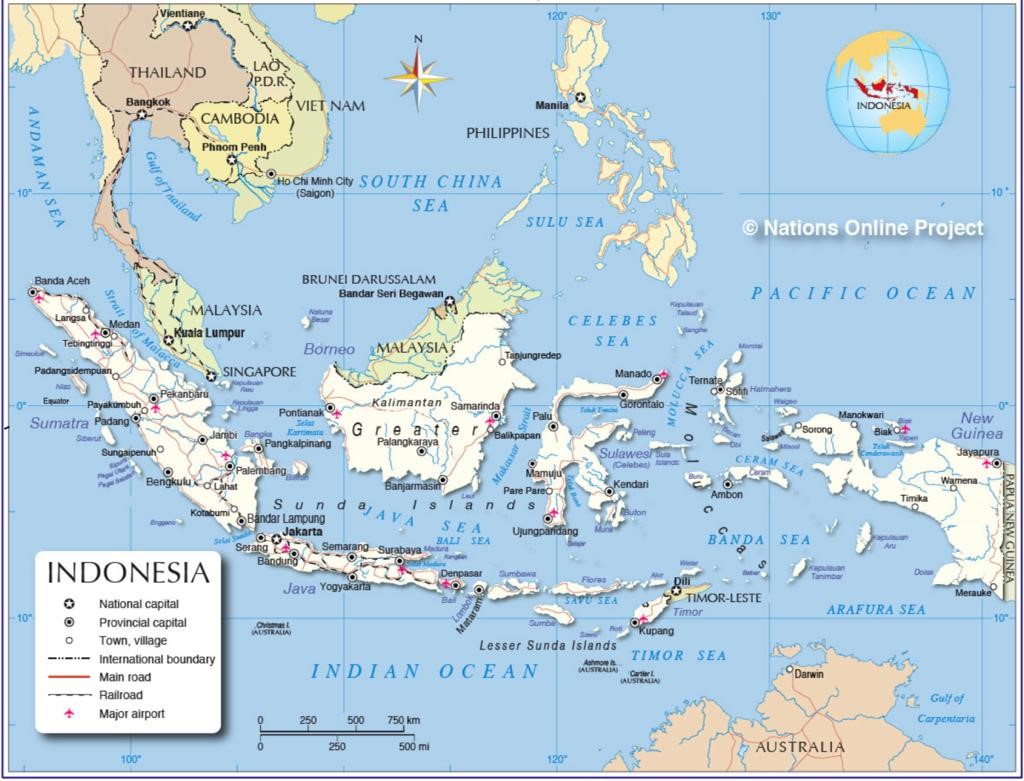 The Republic of Indonesia is the world’s largest island country, with more than seventeen thousand islands, and at 1,904,569 square kilometres (735,358 square miles), the 14th largest by land area and the 7th largest in combined sea and land area.

The connectivity provided by air transport reduces inequality between islands and individuals, by providing trade links and access to goods and services for those in remote communities within Indonesia. Air services are now available to more people than ever.

Much of the world’s volcanic activity is concentrated around the so-called ‘Ring of Fire’, which extends approximately around the perimeter of the Pacific Ocean.  The western ‘Ring of Fire’, which includes Kamchatka (Russia), Japan, the Philippines, Indonesia, and Papua New Guinea, has had many of the world’s major historical eruptions. Indonesia has more than 127 active volcanoes with 5 million people active within the danger zones. Located in The Eurasian Plate, Pacific Plate and Indo-Australian Plate are three active tectonic plates that cause the subduction zones all volcanoes. The latest Mount Merapi eruption (November 2020 and 27 January 2021) resulted in an emergency evacuation of more than 2,000 people.

Many volcanic islands and inland areas in Indonesia are inaccessible by means of regular air transport due to the lack of flat terrain for runways and soft soil, which would require hardening at a great expense. Indonesia identified the importance of developing water aerodromes, with seaplanes providing the best mode of transportation in areas of geographical isolation, in addition to providing recreational access and evacuation in emergencies.

Aviation-related infrastructure is a major part of urban and rural communities worldwide and contributes to the connectivity of populations through integrated transport links. Moreover, the Indonesian aviation industry connects tourists to remote destinations that rely heavily on their healthy marine ecosystems to drive their economic growth. Seaplanes are utilized more frequently to support these islands, particularly when providing health services.

Indonesia’s ocean is one of the busiest shipping lanes. Between 5,000 and 90,000 ships transit through the Archipelagic Sea Lanes each year. Though currently, the Ministry of Health have several “Hospital Ships” which continuously provide health services in the remote villages around Indonesia and in emergencies, the effectiveness can be improved. Large hospital ships are slow to respond over long distances and are only able to visit larger villages with docking facilities. Additionally, medical personnel are reluctant to live on a ship for extended periods. It is planned that there will be a medical base operation in one of the province capital cities with amphibious aircraft in place to provide medical services with one doctor and two nurses to at least three coastal villages within one day. This would allow for patients to be evacuated to hospitals on the same aircraft.

Indonesia has numerous tourism destinations and coastal settlements. According to the World Bank, Indonesia’s ocean resources are worth over USD256 billion annually. Amphibious aircrafts will play a significant role in opening or ensuring accessibility to those regions. It is far easier and more cost effective to build an amphiport (shore facilities for amphibious aircraft) or to install ramps for docking as compared to conventional airports.  Several lakes and large rivers, bays and sea are available for this kind of operation and facilitate medical and other services to isolated villages.

Aviation-supported tourism can also have a vital role to play and is notable for the opportunities it can provide for economic activity at a local level, including high proportions of women and youth participation in remote areas. In addition to providing recreational access and evacuation in emergencies, seaplanes are the most ideal mode of transportation for States with geographical isolation. International provisions are required to further improve safety and encourage a strong civil aviation sector that can promote and sustain social and economic progress through responsible tourism and that depend heavily on water aerodrome operations. In more recent times seaplanes have been adopted for multi-purpose roles that include fire fighting in large inaccessible forests and ocean search and rescue.

Because of its unique geography and accessibility challenges, Indonesia recognized the value of seaplane operations in improving safety and supporting a strong civil aviation sector that can promote and sustain social and economic progress through, as one example, responsible tourism, which is one of the major economic drivers.

Aviation is one of the most innovative industries in the world. The manufacturing sector is continually developing new technology and creates significant urban infrastructure through the building of airports, as well as air traffic management. Aviation has always been a driver of innovation. Each new generation of aircraft is 15-20% more fuel-efficient than the generation it replaces. As part of our aviation innovation activities, and to address our internal needs, Indonesia has designed and manufactured a seaplane with a land version, designated the N219.

Given the worldwide increase in seaplane operations, there are currently no ICAO global provisions specifically related to water aerodromes. The 40th session of the Assembly agreed with Indonesia’s proposal to develop specific Standards and Recommended Practices to address the design, certification, management, safety, and reporting requirements for water aerodromes operations. Indonesia is looking forward to working closely under the leadership of ICAO with States, industry, and other partners to make this a reality as envisaged by the 40th Assembly.