An Interview with ACI’s Director General

The Voice of the World’s Airports, Airports Council International (ACI) was established in 1991 and is a non-profit organization whose prime purpose is to advance the interests of airports and to promote professional excellence in airport management and operations. ACI accounts for 592 members operating 1,853 airports in 173 countries and is based in Montréal, Canada, with five Regional Offices located in Brussels, Hong Kong, Casablanca, Panama City, and Washington, D.C. 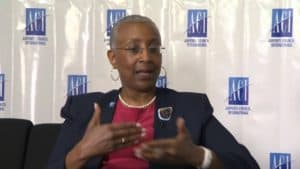 Angela Gittens joined ACI as Director General of ACI World in 2008 with a background in airport management. She was director of the Miami-Dade Aviation Department, Florida, US, which operates Miami International Airport. Prior to that she was at Atlanta Hartsfield International Airport, Georgia, US, where she prepared the airport to accommodate the 1996 Olympic Games. Gittens also served as Vice President, Airport Business Services, for engineering consultants HNTB, where she led the firm’s practice in airport business and strategic planning. As Vice President at TBI Airport Management, she oversaw the transition from public to private ownership of London Luton Airport and managed operations contracts at several airports in the US and Canada.

Angela, you arrived at ACI in 2008 as a recession started. What did you need to deal with as the new leader?

We were moving into a recession. Freight traffic was dropping. We had come off a very heavy growth period in 2007 but in 2008 freight began to stagnate and later that year passenger traffic also started to drop. Though things came back and we had a good passenger traffic year in 2015, we’re seeing freight stagnate again.

We were also starting to feel the challenges of the changes in our membership’s profile – the proliferation of corporatization beyond just Europe. It was going on in Asia, in the Latin America-Caribbean region, a little bit in Africa and continuing in Europe. The emerging markets were really starting to grow in terms of air traffic – countries like Brazil, Colombia, and Argentina with greater middle class populations. India, China, and several other countries in Asia Pacific were really growing. You had the Middle East really taking off around then.

Emerging markets were growing fast, we had corporatization that was going on in both emerging and mature markets, and the combination of the two were telling ACI, “We need more from you.” More guidance and intervention, more data. Because airports were becoming more businesslike, data and benchmarking are critical and we were being challenged to provide more of these services.

During your tenure at ACI, what major changes stand out?

Our move to Montréal in 2011 brought us closer to ICAO with day-to-day contact. Our subject matter experts are at the disposal of ICAO from the beginning of discussions, providing information and gathering industry best practices, while ICAO is deliberating on policy questions or guidance for the industry. 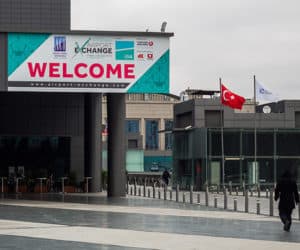 Number two is our Airport Excellence (APEX) in Safety Programme, which we started shortly before moving to Montréal. It’s a peer-review programme where we assemble a team of experts to go to an airport, upon request, and review their safety vulnerabilities based on ICAO Annex 14 and ACI best practices. We call the team that goes on the peer review the Safety Partners. We go over everything the airport’s doing or not doing in the realm of safety. ICAO has supported this from the very beginning, often sending an inspector with the team on a friendly basis.

We send the Host (the requesting airport) a questionnaire about their main issues to ensure the team has at least one expert in the specific areas of greatest concern to them. They may or may not involve their civil aviation authority or other parts of the airport, it’s up to them. The report is a peer review, not an audit. In this way we find that the airports are very open and frank with us in terms of their issues because this is for their use to improve their situation.

Working with ICAO, we have been able to use the information we gather on a confidential basis, to see where the issues are more generally in the industry or in a region. The information helps us determine what kind of guidance and training we need to focus on. Sometimes the issues come from elements that are external to the airport, particularly what kind of authority the airport has, who regulates certain things, what that regulator does, and what kind of impact their regulation has with respect to safety, especially when it comes to ground handling or the airlines, or some other component that the airport may not have control over.

We conduct these peer reviews in various markets in every region, at large and small airports, for any airport that wants continuous improvement in safety.

At the request of regulators and our members, we have now extended APEX to security, and have recently signed a memorandum of understanding with ICAO for cooperation on the project. We’ll have two or three pilots this year, the first being in March, and then we’ll see where we go from there. We’ve also had requests by members to do the same thing in airport economics. Ultimately, we’d like to extend it to all the major disciplines of the airport, including the environment, economics, and customer service.

What are some of the safety issues that APEX has surfaced?

The first is the lack of authority by quite a few airports on airside safety compliance. There are airports that do not have the authority, for example, to revoke the airside driving licence of violators of airfield regulations, and that can create a dangerous situation. It depends on some external regulator, be it in civil aviation, the local police jurisdiction, or some other authority – the airport just doesn’t have it. So they have to go elsewhere to convince a regulator that this action must be taken. And this is the kind of thing where you need direct and immediate intervention or safety hazards are created.

One other thing we’ve seen in developing economies is that they sometimes receive sophisticated equipment, but they may not have the maintenance capabilities or inventory of spare parts to keep the equipment in working order, and they may not get continuous training on how to operate the equipment safely and efficiently. If you don’t have the kind of support that’s needed, sometimes simpler solutions are better. In fact, our safety partners often find the resourcefulness of some airports that encounter problems are lessons for others. They figure out simpler ways to get the job done, and sometimes more cost effectively than the solution in an airport with more resources.

We have found a desperate need for training in a variety of areas. Safety management systems is one of the areas. And this goes across the board, not just in developing markets.

How does ACI fit into the global aviation community and with ICAO?

ACI’s twin missions are to support airport interests and to promote airport excellence, and we think those go hand in hand. The role of ICAO, I think, has become more important in the last several years, and I applaud the leadership both at the Council and the Secretariat levels that they’ve taken up the cudgel. Just as we saw in our membership, they’re seeing that more and more States recognize not just the value of aviation, but that they cannot survive without it. They’re looking to someone for the kind of guidance and support they need to safely, efficiently, economically, and sustainably develop and grow their aviation sectors.

We’re in this together. We all have the same challenges to meet, we’ve all found that collaboration is a key approach, and we’re all taking that approach. We are working very closely with the International Air Transport Association (IATA) on a variety of projects, including Smart Security, which is trying to get more sustainability in the security schemes that we have around the world.

We cannot continue as is when air traffic is projected to double in the next 15 to 25 years. We can’t just keep doubling what we’re doing. We’re not only looking at current-day efficiencies we can get out of the system, but also longer-term changes in the approach, to become more risk-based so we don’t have a one-size-fits-all system, but rather one that can be adaptable to the level of risk and threat that exists either in a particular time period, a particular place, or with particular people.

We’re also working on a series of projects to improve passenger facilitation, and promoting automated border controls. For the governments around the world, it’s the same problem; they can’t keep doing things the way they’ve been doing them as traffic grows. We have found quite a bit of receptivity in the last two or three years to better ways of both securing the border and making the system more resilient and efficient. 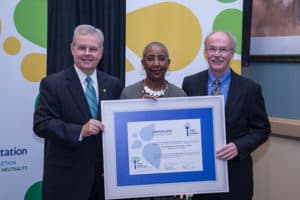 With the Paris Agreement and the recent ICAO Committee on Aviation Environmental Protection (CAEP) meeting, CO2 emissions are a major discussion. What’s a hot button for airports?

Globally, climate change is the key focus of attention. But for individual airports and their communities it’s noise, local air quality, and local water quality. Those are the big issues for the governments and the communities in which the airports reside.

The most important thing to realize about an airport – what drives airport management – is that every airport is located in a specific place. You may be a global player but your fate is determined by what the folks right around you think and do. You need local permission to exist and to grow. You need the support and understanding of the local players so they refrain from placing noise-sensitive uses near you because that’s going to throttle your ability to operate. You need to work with all those parties to get the proper kinds of access to the airport because without people being able to get to the airport on the ground, the airport can’t exist or can’t function properly. So the airport may have to keep one eye on its global place in the sun, but the other eye – and both arms and legs – have to be firmly planted where they specifically are.

I was very pleased to see in this latest CAEP output that community engagement is now on the agenda. It’s something we have pushed for; you can’t ignore it. We think because of the billions that we’ve all spent – airports, airlines, manufacturers, governments – on reducing noise impacts of aircraft, that the problem’s been solved because planes are so much quieter. The noise problem is still there because it’s not just a kind of technical noise measurement problem. There’s a very human, emotional component to it that doesn’t always get calibrated in the machinery we use. So community engagement is extremely important.

Hacking and cyber security are increasingly in the news. How concerned are airports?

Big concern. We’re working with ICAO, IATA, and CANSO (Civil Aviation Navigation Services Organisation) on a cyber security task force to try to identify the risk and come up with guidance on mitigating and managing that risk.

At ACI we have developed an IT security benchmark programme. It allows airports to look at and test their own systems in order to mitigate cyber security threats. We are just in the beginning stages; it’s being piloted at several airports. Next year we should be ready to make it available to all airports.

Cyber is one of those issues that’s going to continue to evolve and mutate, and it’s something that’s going to have to be kept up with. As we increasingly move into data sharing, where we’re trying to go to get the efficiencies that we all seek, we as an overall industry become more vulnerable. We all have to be at the same level, a very high level, of cyber security protection; otherwise we endanger each other.